« Back to Book News and Reviews « Older Entry | Newer Entry »

“Don’t give us any spoilers,” one of my friends warned me when I told her I was intending to review Undivided by Vicky Beeching. So I shall try not to. 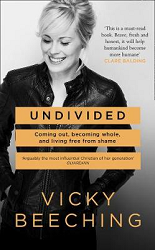 Vicky Beeching, both in her Preface and Final Disclaimers, makes clear what she is writing. “This is not a theology book or an academic essay; it’s a memoir.” It’s a contemporary story of one very gifted and prominent young musician struggling with her sexuality in an antagonistic culture. In effect, she simply says, "This is how it was for me."

So how does Undivided do as a memoir? For me it was eye-opening and harrowing. Although I’ve met Vicky once, I had no idea of the pilgrim’s progress she had been through. Now I understand a bit more. She is extraordinarily honest about her life, her thoughts and her faith – something which lies at the heart of her being.

In her early teens, Vicky realised that she was gay. For her it immediately created a conflict because at an even younger age she had committed herself to faith in Jesus Christ, and the evangelical culture in which she was brought up considered the two incompatible. One could not be gay and a Christian. And so for the next twenty years of her life, living in the heart of that particular Christian world, she struggled to be free of her nature and was constantly in fear of her orientation being uncovered. That struggle led to despair, many tears and the point of suicide.

Having myself grown into a similar world, I recognised the situations that she describes as true to life, from youth camps, to inappropriate use of the Bible, to double standards, and courageous stands. I also recognise the honesty of internal questioning and doubting to which she admits. It’s clear that her sexuality is not a result of nurture. Her family and her heroes of faith are staunchly conventional in their teaching on the matter. Her sister is straight. She grows up wishing she was too.

The reason that Vicky’s story captured the headlines like no other is that she was arguably the most popular female song-writer and worship leader of the noughties on both sides of the Atlantic, and in the US the Christian music business is a multi-million dollar concern. Educated in theology at Wycliffe, the evangelical hall in Oxford, her musical gift gained an added theological depth, so that when she went to the States in her early twenties her talent was recognised and she was soon signed up by EMI. She was in demand in mega-churches and on radio stations across the country. Her tour schedule was gruelling, much of it in the southern Bible Belt, where there was particular antipathy to the LGBTQ+ movement. As is now well known, it was her physical health that put a stop to her stellar life as a Christian song-writer and performer, and brought her back to England for urgent treatment on the National Health Service.

Having admitted to herself that she needed to come out in order to become whole and live free from shame, Vicky then went through a rigorous study of the Bible, which remained the foundation of her faith, in order to see whether she had come to the wrong conclusion. She highlights two occasions, in Brompton Oratory and St Paul’s Cathedral, which lead her to the conclusion that she was right. “God was letting me in on a new perspective, one of radical acceptance and inclusion. ‘Do not call unclean what I have made clean’ echoed round my head and heart. The person I’d always been – a gay person – was not something to be ashamed of. God accepted me and loved me, and my orientation was part of his grand design.”

In the final section, “Into the Unknown”, Vicky writes about her interview with Patrick Strudwick which was published in The Independent newspaper in August 2014, and grabbed the headlines worldwide within 24 hours. The fall-out from her admitting that she was gay beggared belief and, I am deeply sorry, reflected very sadly on the Christian community to which I belong and which she still calls hers. It extended for beyond disagreement into insult, condemnation and threats. Practically her music was widely boycotted and engagements cancelled or not renewed, drying up her income stream and threatening her livelihood.

When she was a child, Vicky’s ambition was to be a missionary like her much loved grandparents. If there is any happy ending to this gritty book, it must be that she is now representing faith in unlikely places, most of all in the LGBTQ+ community, where her Christian faith in the face of all odds is recognised and given a voice.

So, who should read Undivided, and why?

First, let’s start with people like me: straight Christians, brought up to be suspicious or judgmental about homosexuality. It gave me vivid insight into really what it is to be differently orientated in a still intolerant community. The book is dedicated “to the memory of Lizzie Lowe, a fourteen-year-old British girl who tragically took her own life in 2014 because she feared telling her Christian community that she was gay”. It’s almost impossible to grasp the nature and power of that fear until you read a memoir as well-written as this.

Secondly, gay Christians should read it, especially if you’re young. You will find you’re not alone, and that it’s possible to be gay and Christian, and have as full and fulfilled a life as anyone else. In fact, it would be so for any gay person no matter of what faith.

Thirdly, everyone should read it, wherever you stand. It is an honest insight into authentic living. It is a moving account of a hard-won liberation from fear and shame. And it's a good read.

I suspect there are many young people worldwide who are in a similar situation to Vicky’s. What she has given us, by virtue of her former popularity in the Anglophone world, is a view through a magnifying glass of their experience. We may make of it what we will. We may embrace it and support their freedom. We may dismiss it and resist any change. We may simply choose to take note of it. What we may not do is ignore it. I'm reminded of Martin Luther's apologia, "Here I stand. I can do no other." Please read it from beginning to end. Thank you, Vicky Beeching.

PS I still think The Wonder of the Cross is one of the greatest worship songs ever! How tragic that Vicky is no longer considered as acceptable in worship.

(At present Undivided is available only in hardback. It comes out in paperback in April next year. I recommend either or both!)

Churches working together serving the Community